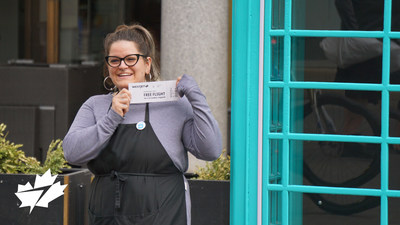 In the video, WestJet’s teal painted phonebooth was positioned to ring throughout the day in downtown Calgary in hopes of enticing curious pedestrians to answer the call. Of the thousands who walked by, 10 of those who answered were gifted round-trip tickets for two from Calgary to London, Gatwick.

“London is an incredible destination for our guests and with our new non-stop Dreamliner service between Calgary and London, Gatwick there’s never been a more comfortable way to get there,” said Richard Bartrem, WestJet Vice-President Marketing Communications. “We thought there was no better approach to entice guests to visit Britain than by testing out Calgarians’ curiosity for adventure through the unusual ringing of an iconic London phonebooth in our own downtown core.”

The phonebooth used in #LondonCalling is authentic and was shipped from the United Kingdom prior to being painted teal. The ‘Piccadilly style kiosk’ weighs over 1,500 pounds and was transferred throughout the day on April 23 to locations on Stephen Avenue and Eau Claire in downtown Calgary.

WestJet is Calgary’s largest airline, and by June 2019, will offer flights to 68 non-stop destinations with over 1,000 flights per week from YYC. More Calgarians choose WestJet for their air travel than any other airline.

About WestJet
Together with WestJet’s regional airline, WestJet Encore, we offer scheduled service to more than 100 destinations in North America, Central America, the Caribbean and Europe and to more than 175 destinations in over 20 countries through our airline partnerships. WestJet Vacations offers affordable, flexible vacations to more than 60 destinations and the choice of more than 800 hotels, resorts, condos and villas.  Members of the WestJet Rewards program earn WestJet dollars on flights, vacation packages and more. Members use WestJet dollars towards the purchase of flights and vacations packages to any WestJet destination with no blackout periods, and have access to Member Exclusive fares offering deals to WestJet destinations throughout our network and those of our partner airlines.

WestJet is proud to be recognized for three consecutive years as Best Airline in Canada (2017-19) and awarded among travellers’ favourite Mid-Sized Airlines in North America (2019). From 2017-2018, WestJet was also awarded among travellers’ favorite Mid-Sized and Low-Cost Airlines in North America. The airline was also recognized among the Economy Class winners in North America, 2018. All awards are based on authentic reviews from the travelling public on TripAdvisor, the world’s largest travel site. We are one of very few airlines globally that does not commercially overbook.

WestJet is publicly traded on the Toronto Stock Exchange (TSX) under the symbol WJA. For more information about everything WestJet, please visit westjet.com.